The EU, business and the future: Enrico Letta at Bologna Business School

Ex Premier Enrico Letta is right now Dean of The Paris School of International Affairs at Sciences Po. He stressed the importance of the decentralization of leadership in Italy in front of the audience of students, alumni and faculty of Bologna Business School.

Enrico Letta said: “In Italy we have to work on skills by enhancing the centers of excellence”.

“Macron is the creation of the conventional way for the formation of the French ruling class, which means, the studies conducted at the École Nationale d’Administration (ENA). This reality is highly criticized in France. There’s been a series of attempts to reproduce it in Italy but they have all failed. This is because, compared to France, which has a centralized capital in Paris, Italy is a country where often the best skills come from peripheral realities and Bologna in this sense is one of the capitals of Italian leadership training.”. On May 9 at Villa Guastavillani Enrico Letta started with this speech to analyze the changes that might be reflected on Europe after the French presidential election.

A new future for Europe ?

“With the Brexit, 73 European parliamentarians disappear. The solutions are: the parliamentarians’ redistribution in a of cattle markets among the nations represented in Parliament, or the creation a new pan-European constituency where it is possible to vote a single list irrespective of the country of affiliation. This  mode would create a European political debate and citizens are joining in European policies”. This is the proposal made by Letta to restore confidence in the EU in a political context that, with the defeat of Marine Le Pen, would lead to “trading for the dissolution of the European Council“. 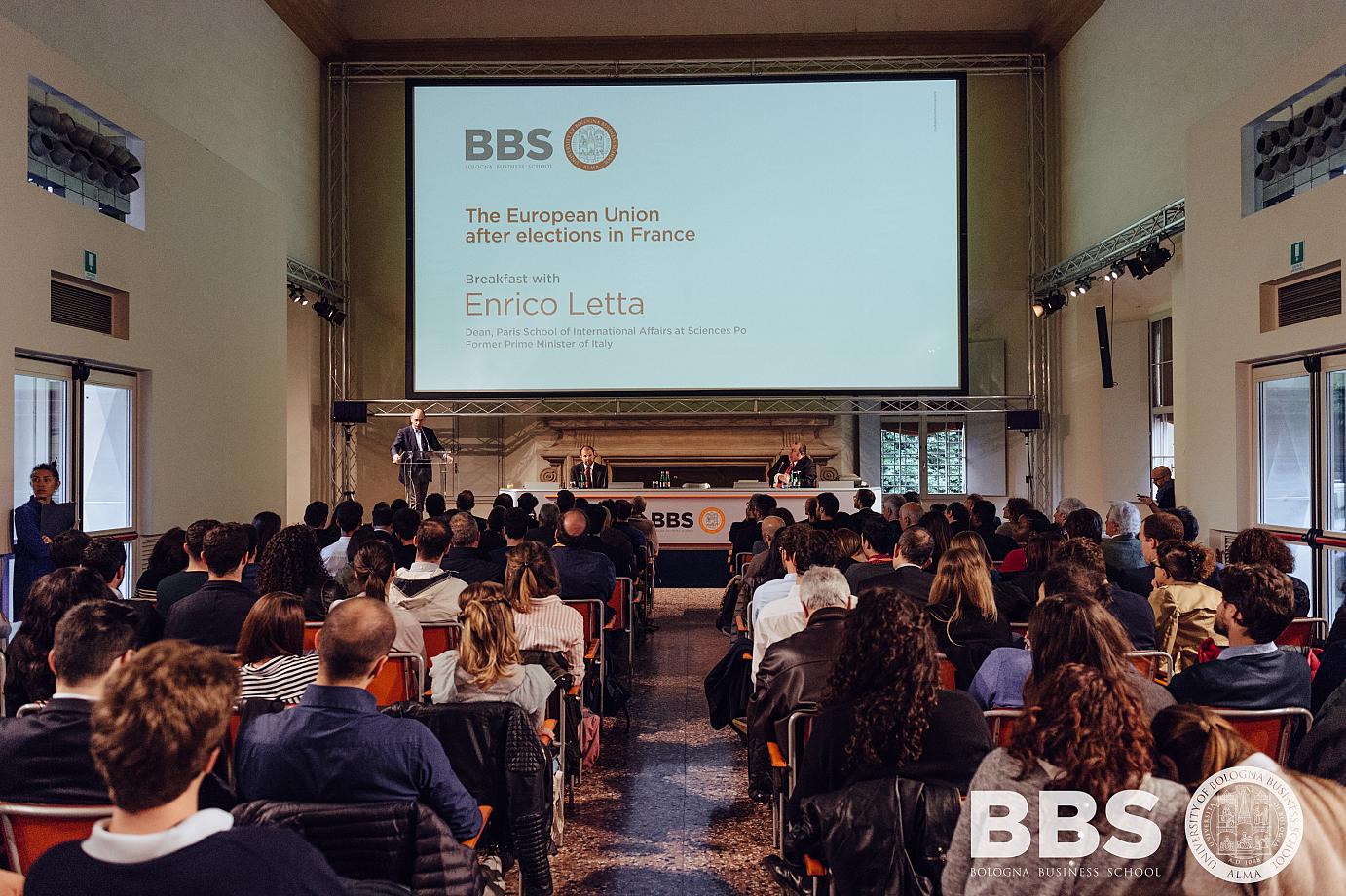 See beyond the company to understand the business

At the opening of the speech there was Massimo Bergami, Dean of BBS, who recalls the need to analyze the economic and systemic changes of European policy for businesspeople: “We have to get used to see beyond the company to better understand the context in which the business moves”. The occasion coincides with the anniversary of the speech by Robert Schuman, the French Minister of Foreign Affairs, who on 9 May 1950 proposed to create the ECSC, the European Coal and Steel Community, the first supranational institution of a series that would lead to the creation of EU. 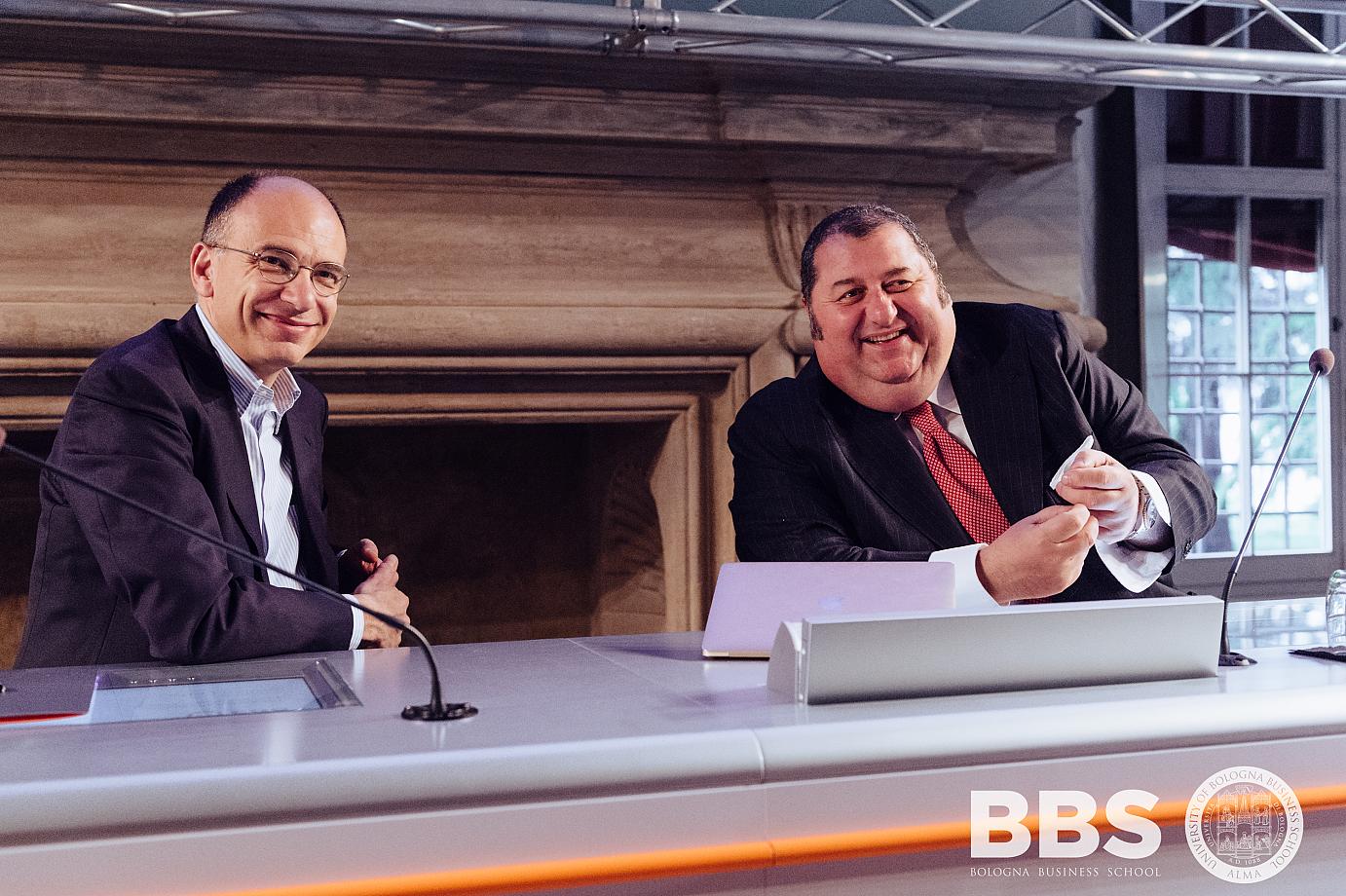 European Union but not only: the end of traditional parties

“We are at the end of traditional parties,” Enrico Letta acknowledged. “Macron is running alone and he destroyed the Republicans and Socialists, scraping the papers of French politics, involuntarily providing greater international visibility to Marine Le Pen”. And responding to who finds in the neo-president a man of finance and conservation “It is not the product of elites and bankers. He won because he is not a professional politician, unlike other candidates, and he has created an open movement.”

Letta underlined the short-circuit of the primaries in these French elections. “There were a very successful primaries with 4 million voters for Republicans and 2 million for Socialists. Yet both parties didn’t find the breath necessary to get to the final. “And yet ” You can not evaluate the changes as it used because they have become sudden, intense, unpredictable. These three adjectives completely change our way of being, make us more disenchanted. The ability to stay in this pace of change is very complicated. ”

Who thinks that the EU is a tool of austerity, Letta answers “All countries have received European dividends. Since 2015 for France, Ireland, Italy and Spain,are being granted to go over budget. For Italy the Draghi bonus is 33 billion euros in 2 years. You have to use them well. If the next German government coalition will no  have Schäuble as a minister to the economy, things will be able to evolve positively. “