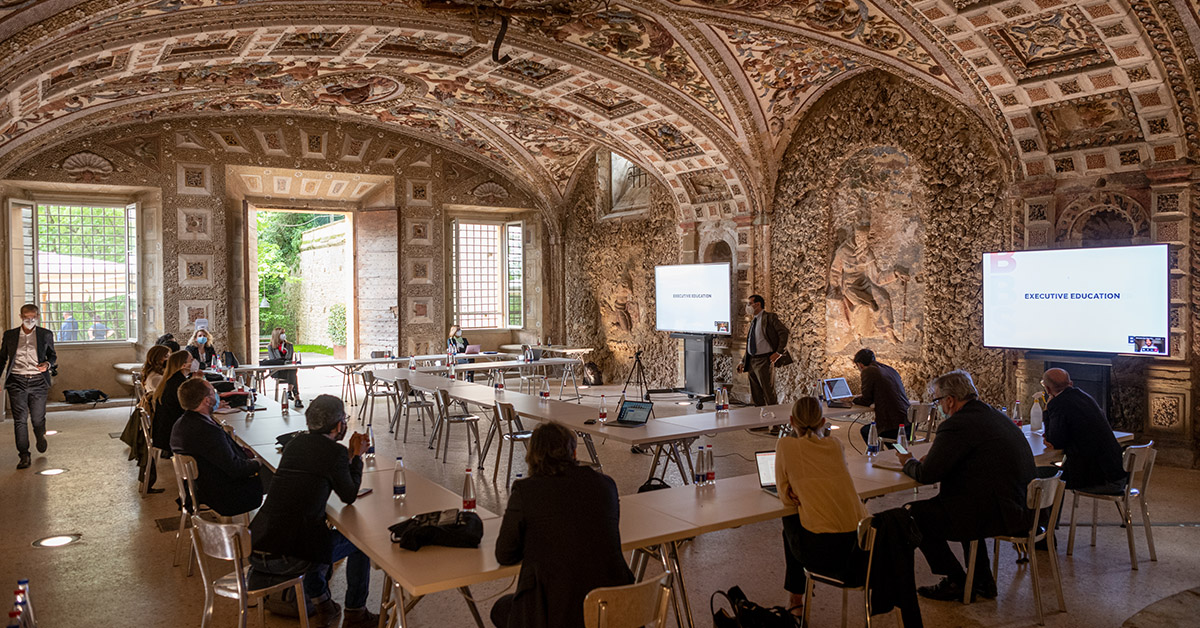 In presenting and describing the new BBS Centre for Sustainability and Climate Change, which is now in full swing after the presentation at Villa Guastavillani on 5th May and the inauguration ceremony on 17th May, it is important to stress, once again, its strong interdisciplinary nature.

We already talked about it during the opening ceremony, the researchers involved talked about it and, not by chance, they all belong to the University of Bologna, working on different disciplines.

Let’s go back to the subject with Professor Matteo Mura, Director of the BBS Centre for Sustainability and Climate Change, to take a step further and to offer an even more precise definition of the Centre’s activities. We do so by starting with another word, certainly more unusual and more complex, more distant from the world of practice, but which is important to place alongside the better-known concept of interdisciplinarity because it represents the distinctive characteristic of the Centre and illustrates, better than any other, its objectives, both in terms of education and in terms of projects and activities with companies. This word is “transdisciplinarity”.

What is transdisciplinarity and why is it important to apply it in the context of sustainability?

Transdisciplinarity is the ability to go beyond the collaboration between different disciplines, called, precisely, interdisciplinarity, by trying to remove the boundaries that separate and distinguish them. As a Centre, we set this goal for ourselves, which certainly represents the final destination of a difficult journey that we are undertaking.

The first characteristic of transdisciplinarity is that it is not just a combination of skills, as interdisciplinarity is, rather it is a production of new knowledge derived from different domains of previous knowledge. The second characteristic of the transdisciplinary approach concerns the need to bring together two worlds that are sometimes distant: Academia, which works through vertical and highly specialized knowledge ‘silos’, and the world of practice, which, due to the fact that it often has to react to very rapid context changes, works on real problems that require fast and effective solutions. Thus, while on the one hand we have Academia, which works to create generalizable models and therefore applicable to different contexts, on the other we have business practice, which provides solutions and models linked to contingent situations that will not necessarily be able to function in other contexts.

Simplifying, therefore, the transdisciplinary approach aims at using vertical and specialized skills, with the depth that characterizes Academia, and applying them to problems that have an operational dimension. This type of approach is particularly appropriate for the resolution of certain problems, such as those related to sustainability and climate change, which are referred to as being ‘loosely defined’, i.e., problems that are difficult to define and whose boundaries are not well outlined. For this category of problems, by their very nature difficult to classify in terms of disciplinary boundaries, the transdisciplinary approach can really make a difference. Such an approach should not be taken as a given, but as a goal to be pursued. Transdisciplinarity represents a challenge as it requires individuals to question not so much their own skills, but rather, their own way of approaching problems.

What are the advantages of a transdisciplinary approach?

We chose to proceed in this way because working with a purely academic approach poses the risk of not applying in practice the results of research. So, although research certainly cannot stop, indeed it is the basis of our activity, working in a business school, therefore in close contact with companies, it also requires practical solutions to be implemented quickly.

The opposite problem, which characterizes the world of practice instead, consists in often focusing on a too specific solution, losing sight of the broader scenario. This lack of systemic approach has manifested itself, even recently, in the definition of some regulations introduced in Italy (e.g., the ‘plastic tax’ or the financial incentives for pellet boilers) which had the aim of solving a specific and current problem, but actually opened up another – broader and much more significant and long-term – one.

Bringing together academic and operational approaches through transdisciplinarity therefore becomes the key to avoid, on the one hand, this kind of mistakes and, on the other, sticking too much to the theoretical level.

At an operational level, how do you plan to implement this approach within the BBS Centre for Sustainability and Climate Change?

Being supported by a University like Bologna University represents a great opportunity for the Centre. The 11 researchers who work at the Centre come from 9 different departments of the University of Bologna and from 11 different scientific-disciplinary areas and all develop their activities having as a leitmotif issues related to sustainability and climate change.

Since the Centre’s faculty comes from such diverse disciplines, the first step was to find a common language. The same words, in fact, can take on different meanings depending on the disciplinary context in which they are used. It is therefore necessary to establish a shared territory within which to move and communicate in harmony, and to do so, everyone must learn to better understand what colleagues in other fields do. For this reason, we have launched a series of 11 “Lunch Seminars”, lasting an hour each, during which each of the researchers will present their research activities to their colleagues, and not as if they were illustrating them to their academic community of reference, but to a community that does not have in-depth knowledge of their discipline. A different language, in some ways simpler, without elements taken for granted, is helping all of us to better understand what others do, and this contributes greatly to create that common ground which is fundamental for the achievement of our goal.

The second step we are working on is the creation of small working groups on projects that have a short-term time scale – a few weeks or a few months – and are very operational, such as the organization of a two-hour lecture or the writing of an article aimed at a wider audience. These working groups have a mixed composition, with two, three or four researchers, who are thus led to reflect on the possible results that come from a de facto transdisciplinary process. Within these projects there are also dissemination activities in which the need to create a common language is revealed in all its importance, such as the creation of a series of thematic podcasts, developed through the collaboration between representatives of different disciplines.

A third, further opportunity for the practical implementation of the approach described above is the creation of projects with companies. We aim at developing applied research in close collaboration with partner companies, bringing together the expertise of the Centre to address not only the problems of an individual company, but also the needs of entire industrial ecosystems.

These three steps – understanding better what each researcher does, creating interdisciplinary pools and, finally, getting to develop real transdisciplinary projects – represent the operational ways through which we are trying to put into practice, together with companies, this transdisciplinary approach to sustainability and climate change.

Two further elements of interest concern the third phase, that of projects.

The first concerns the fundamental role that education programmes will play. In particular, we aim at developing initiatives that target small and medium-sized companies. Indeed, while large companies are already gearing up to meet the challenges and opportunities generated by sustainability, SMEs often struggle, lacking in-house skills and sometimes even the necessary resources. We also aim at providing them with technical and operational tools, because one of the great advantages of the Centre is that it also includes technicians. In our team we have, among others, electrical engineers, energy engineers and even law experts, who can suggest operational tools to solve a problem.

The second element brings us back to the three pillars that characterize the Centre and concerns a series of precise commitments that BBS has taken on in the creation of this new entity: Learning, i.e., the School’s core competence, which concerns managerial training; Dissemination, which has to do with the commitment to share the results of the projects carried out with the Community of Bologna Business School, but also with society at large; and Impact, whereby applied research projects aim at having a tangible and significant impact on companies and local areas.

I would like to conclude by pointing out that all of this is not unrelated and independent from what is already being done at Bologna Business School for sustainability, rather it is its natural continuation. To date, every BBS master’s programme has at least one course on sustainability and business ethics, and we also offer classroom speeches and case studies that derive from projects we have underway with various companies, in which sustainability is the key element and becomes a challenge presented to students through a pathway that brings them closer to the practical reality of industry.

Finally, the 11 researchers of the Centre join the BBS core faculty that has been engaged for some time now on these issues within the school. In particular, Professor Mariolina Longo, with whom we have been collaborating for over fifteen years on research – and this demonstrates, once again, that everything we are doing would not be possible without a research background – and Professor Alessandro Pastore, who represents the business world, since he is an entrepreneur himself, working in England, in the technological district of Cambridge, and has been involved since 2011 in the Global MBA in Green Energy and Sustainable Businesses.

Hera (B): an innovation to realize circular economy

The rise of Energy Costs: Motivations and Consequences

The future of Italy, if the energy transition goes slowly