GRADUATION 2020|2021 – Eric Schmidt in Bologna. The honoris causa degree and his words to the graduating students

Eric Schmidt, co-founder of Schmidt Futures and at the head of Google for over twenty years, received the honoris causa degree in Business Management from the University of Bologna, by the Rector Francesco Ubertini.After a laudatio delivered by the Dean Max Bergami who, in his capacity as proposing party, highlighted Schmidt’s talent, his vision ability and his extraordinary professional journey. A path that also passes through Bologna, as Schmidt himself pointed out, revealing a deep and sincere attachment to the city that welcomed him as a young citizen for a period of two years.

The Rector Francesco Ubertini chose to celebrate this event together with the more than 1500 graduating students gathered in Piazza Maggiore, but also together with the entire city of Bologna, which is once again living as a true community, with the Alma Mater and BBS together in the square, outside the usual institutional walls.

“Having a protagonist of change like Eric Schmidt with us today, I believe, is the most appropriate way to celebrate the twentieth anniversary of BBS. His presence here, in the center of the city, also should be a signal for the great movement of technological innovation that Bologna is beginning to experience and that will probably mark the life of the University and the city in the coming years”, Ubertini said, upon opening the ceremony introducing Schmidt, whose “extraordinary ability has been to seamlessly integrate technology strategy into business strategy, to maintain a culture geared toward innovation at all times, to grow the most innovative activities alongside the most established ones, to overcome the challenges of digital competition on a global scale”.

We set up our site so that YouTube does not send cookies to you unless you play the video.

These characteristics made Schmidt “one of the most important businessmen of the contemporary era, not simply because of his achievements as an executive, but also for his impact on innovation and society as a whole, his contributions to the academic and institutional world, and for his many philanthropic initiatives globally”, as the Dean Max Bergami explained.

In explaining the motivations behind the award of the honorary degree, the Dean traced the stages of Eric Schmidt’s career and professional, academic, and philanthropic development, emphasizing his value to society as a whole and closing on a personal note. “In the last couple of years”, Bergami said, “I’ve had the good fortune of interacting with Eric in different ways. I have been impressed by how he keeps his eye continuously focused on the future, working not just to maximize the opportunities offered by new technologies, but also to support talented individuals and communities in their effort to build the future. And, most of all, I am happy since I met a man that, regardless of his success, power, and wealth, hasn’t lost his humanistic soul.” 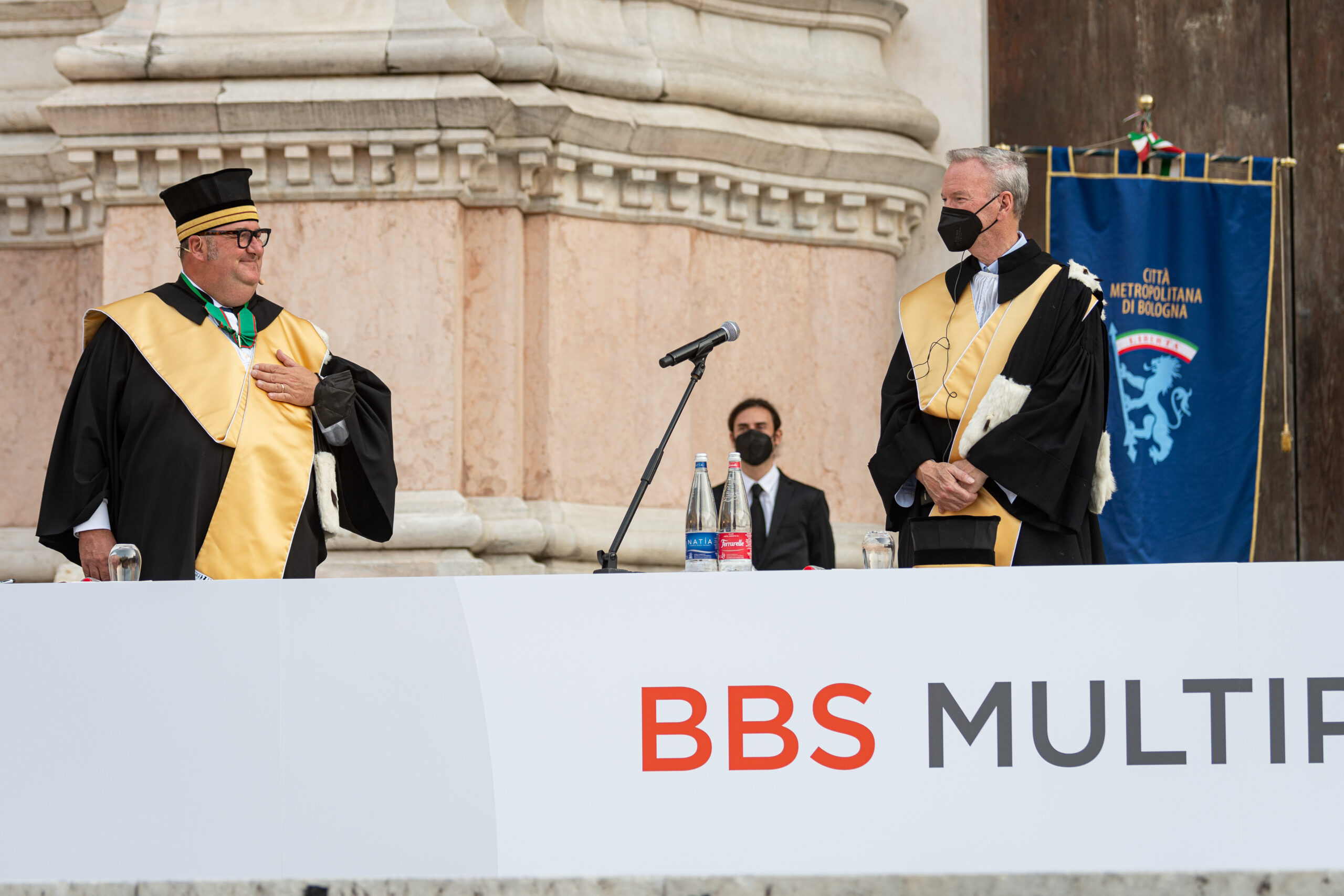 That very soul was able to emerge, conquering the audience, during Eric Schmidt‘s speech, which began with a real declaration of love to the city of Bologna.

“When I was a child, I used to play around the fountain in Piazza Maggiore. Today it is an honor for me to return here to receive such a prestigious recognition,” he said at the opening of his doctoral lecture. “Italy and Bologna have had a profound impact on me, as a person and as a professional: today Google is one of the most important companies in the world also thanks to this city and this country. A city and a country which doesn’t need to envy the most advanced industrial models, including that of the United States. The future of Italy is in business: here innovation is not a place but is built by people.” 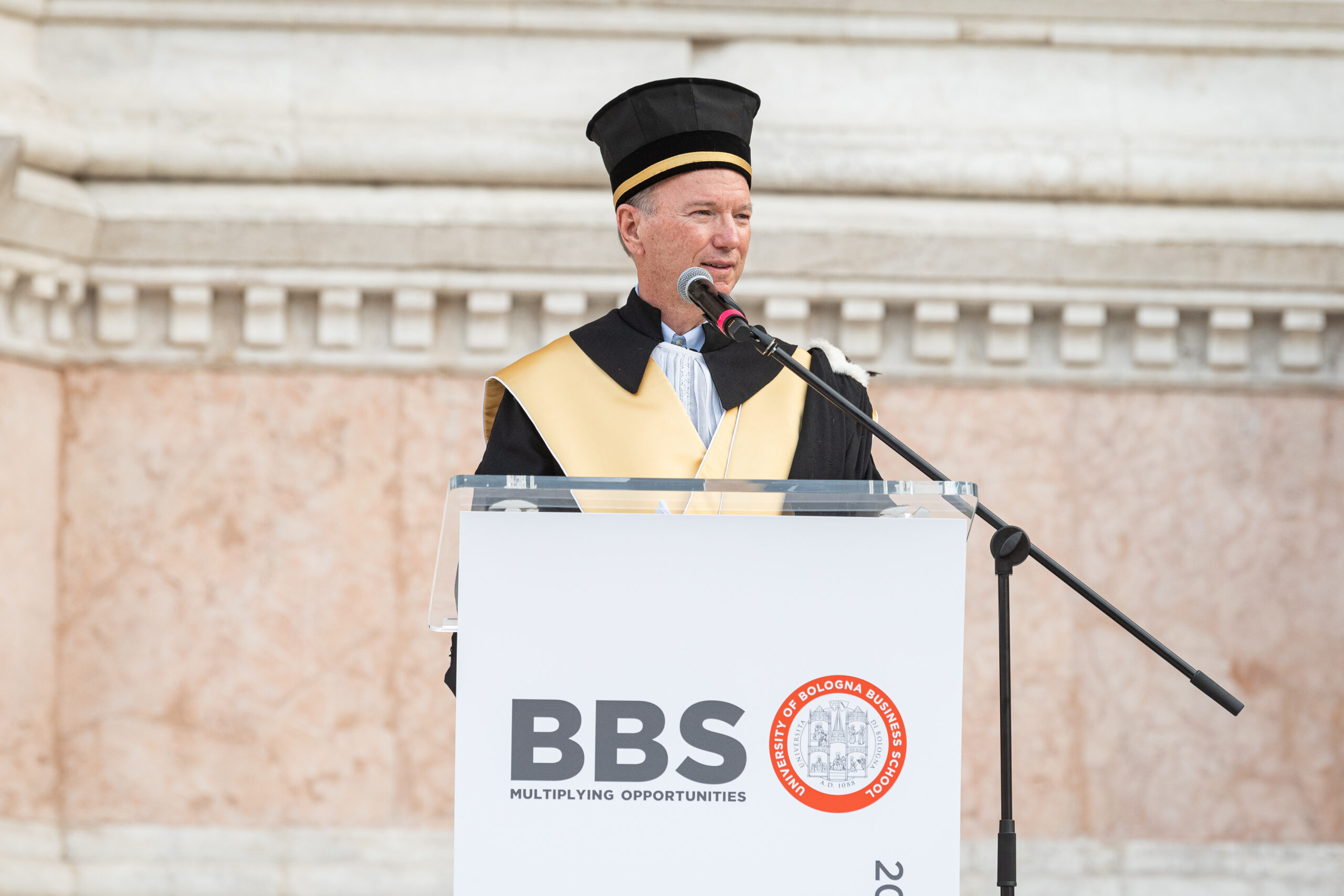 A speech that inspired the more than 1,500 graduating students present to whom Schmidt wished to remind how talent and training are two elements that enhance each other – “education creates talent” – in building mature people who are passionate about knowledge, capable of making the seeds of knowledge take root deep down and germinate and grow over time. Finally, confirming the humanistic soul highlighted by the Dean in his speech, Eric Schmidt addressed the graduating students directly, inviting them to continue to dream because “Italy can become the most important industrial center in the world. A new Google can be born here, thanks to a new technological Renaissance.