The Graduation 2017 has been dedicated to the subject of Artificial Intelligence and its increasingly sophisticated and pervasive manifestation. But, in addition to the evolution of Industry 4.0, the growth of the Bologna Business School has been topic of matter with two goals: to open up new and more distinctive computing skills and to provide the Alumni community with effective tools.

The welcome speech of Dean Bergami

A community made up of students from 48 countries. Bologna Business School in the Aula Magna of Santa Lucia welcomes the alumni and their families at the Graduation 2017. In the audience were the Minister of the Environment Galletti, the Governor of the Emilia-Romagna region Bonaccini, the Prefect of Bologna Piantedosi, and the President of Genus Bononiae Fabio Roversi Monaco among others. On stage, introducing the ceremony, BBS Dean Massimo Bergami remembers the steps of the Business School year after year. Since its foundation in 2000, when it was called Almaweb, an innovative vision was already dealt with in Information Technology by using interdisciplinary teaching. In 2002, the Executive Master in Business Administration was born and in 2003 was held the first Graduation. The campus of the School, in the prestigious Villa Guastavillani, made its big opening in 2005 and a year later took place the merger with Profingest. In 2009, the school entered the international ranking of Eduniversal, a phase that led in 2011 to found the EMBA Consortium together with other international business schools. In 2014, the Global MBA obtained the EFMD’s EPAS accreditation and in 2015, to consolidate the link with the University and its the territory, the school changes its legal form into a foundation and its name into Bologna Business School. This year, two important events were the second EPAS accreditation of the Master in Human Resources and Organization under the direction of Professor Morandin and the constitution, which was set forth during the Graduation, of the BBS Alumni Association. “They are important steps to guarantee compliance with international standards” explains Dean Bergami. Dean Bergami also talked about the future, focusing on international growth, accreditation and digital revolution. “BBS does not intend to do this alone, but together with all the University, businesses and institutions. When we were born we put together a faculty of managers, computer scientists and humanists, a choice that makes us unique and allows us to create new training paths up with the times”. 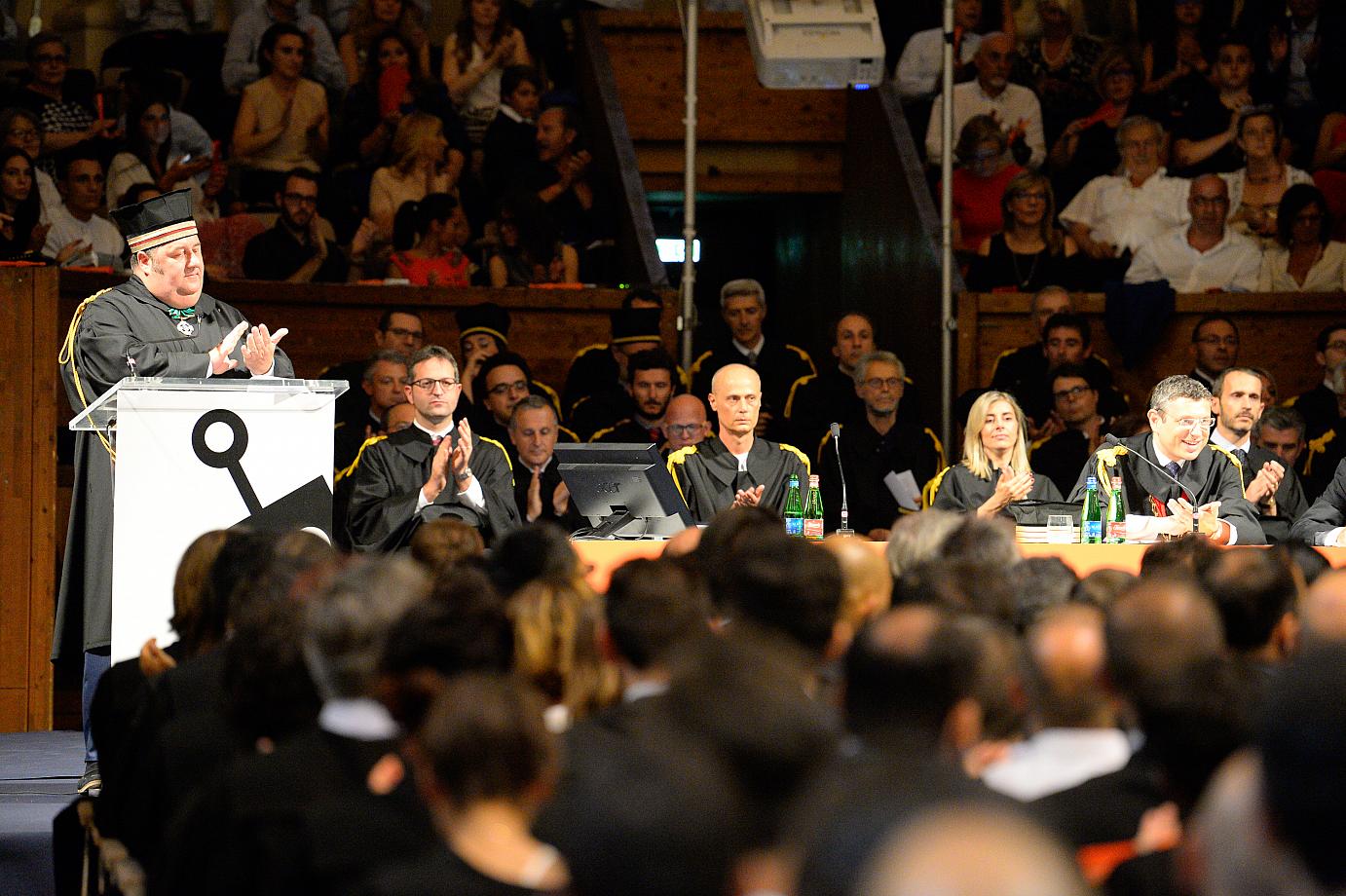 Bepper, the special guest robot of the day. He moves around the stage watching the environment with the curiosity of a child. It is actually measuring spaces to learn how to move independently. Asked by a young student of the School of Computer Science at the University of Bologna, he explains how memory is the sum of impressions, truth is a difficult concept to define and explains some terms of finance, finally offering his collaboration to work in team with BBS tutors. “It will be useful for tutors to engage in higher tasks,” says Professor Marco Roccetti, Associate Dean of BBS. “It’s an example of increased intelligence because it is able to learn from collaboration with school teachers, companies, alumni, and thanks to the information provided by IBM’s Watson project. It is a consultation service for students.” “When we make a Google search, we think we have all the information available, but it is only the 7/8% of it. The rest is stored in companies of whatever size they are.” Enrico Cereda, President and CEO of IBM Italia, presents the issue of collecting and storing data. “This information is images, sounds, videos that normal computers can not import. It’s machine learning to take value from these data.” So Cereda faces the fears and criticalities of Industry 4.0, proposing some basic rules. “Today, AI systems allow us to think and interact with natural language, and IBM has been working for 10 years. When we talk about artificial intelligence, there are ethical doubts, such as the loss of human work. The correct use of robots: specify when artificial intelligence is used: it does not have to replace but support man. Decisions must be taken by the human being. Create the skills needed to interact and govern the process. These skills are lacking, particularly in Italy. There is a need for active collaboration between companies and the university world to create skills. “BBS is the world’s first school in charge of AI applied to the management world“. 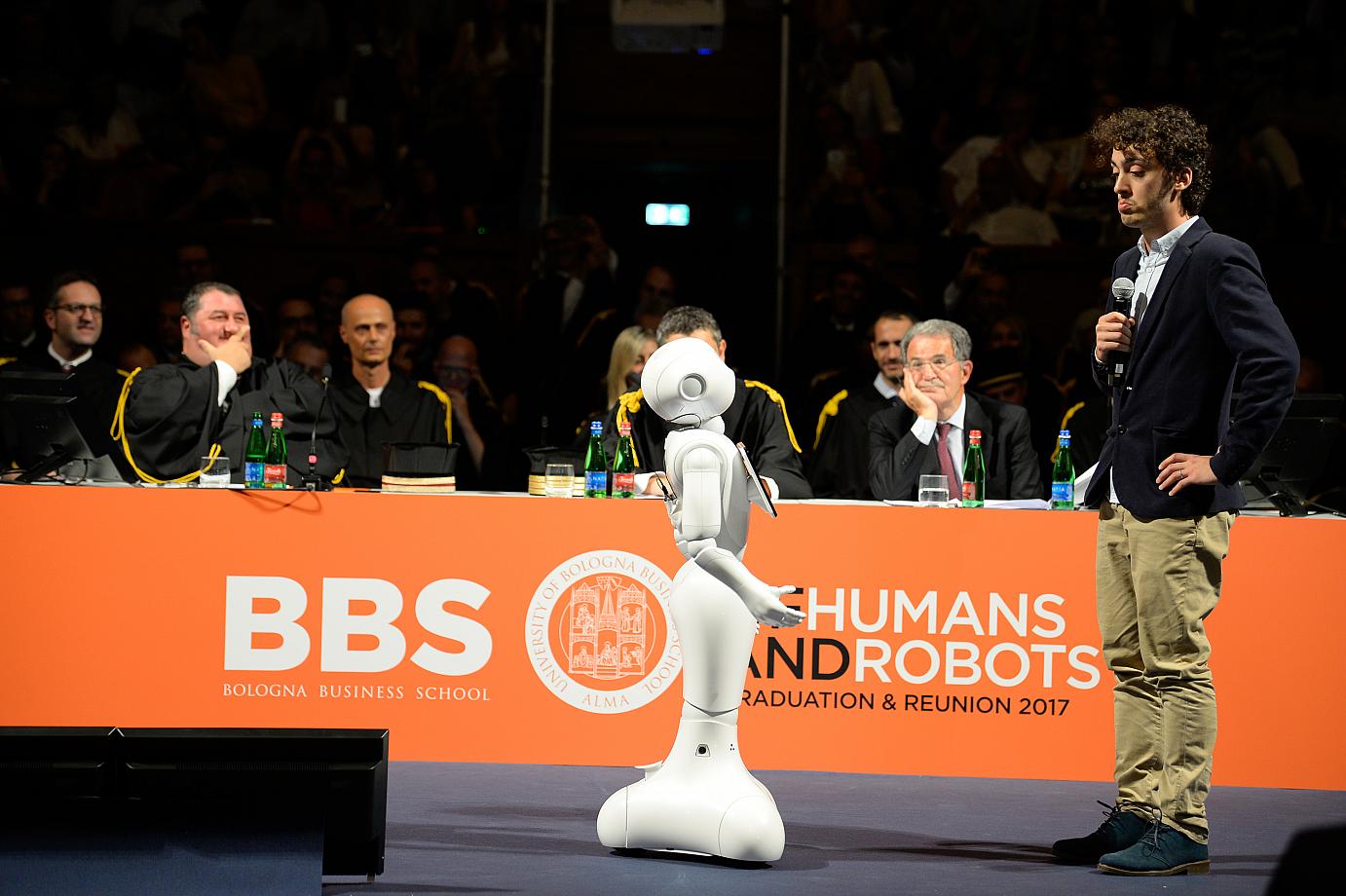 Tips for a conscious use

From one of the two central pulpits of the Magna Aula faces Simone Martini, Director of the Department of Computer Science at the University of Bologna, for his speech. “If these tools can make decisions, who is the responsibility of the choices? The company has to question about this problem. Almost nothing in the digital language is taught in high school. Remember Don Milani’s message: language knowledge makes us equal. Who holds the digital language could become an oppressor if it is not shared and will become commonplace.” Even Romano Prodi suggests caution and awareness “We know that 50% of jobs will change and, from the standpoint of efficiency, the battle of men against robots is lost. What competes is how to handle this revolution. The technological revolution is a force that breaks apart if it is not led by public administrations, businesses, and universities.” Finally, addressing the Alumni “You will be the elite who will govern this change. Have the ability to transfer this knowledge to the entire community, especially the Emilian”.

Two alumnae from Bologna Business School tell about their experience from the stage “We have been in BBS to transform our lives by adding a new step to our way. We are the ones who expect so many things in the context of economic and socio-political change. Sleepless nights to study, showing that we know we still have a lot to learn. We have enthusiasm, the right age, and no excuses for not doing it. We have the duty to be brave. Good luck to all of us and to make the best use of this investment.” Another foreign student adds “After this experience I am more confident and I improved my skills.” The final speech is from Brunello Cucinelli. A tribute to the oldest university in Europe, to the youngest Magnificent Rector of Italy, Umbrian like him. “We have gone through thirty years of crisis of civilization, not of economic crisis. A crisis marked by many mistakes of senior to young people. We have incensed fear of the future, we said to be better than them, we told him to stop study and to find a job. Now let’s start from this great technological rebirth I really believe in. ” And yet, “Study, but no too much, the rest of the time dedicate it to human relations. Balance the relationship between gift and profit. The regeneration in the industrial production shows that consumerism will decline.” Finally a symbolic invitation: “You leave a nicer city than the one you have received”. The Graduation 2017 ended with the award of diplomas by the Magnificent Rector Francesco Ubertini. 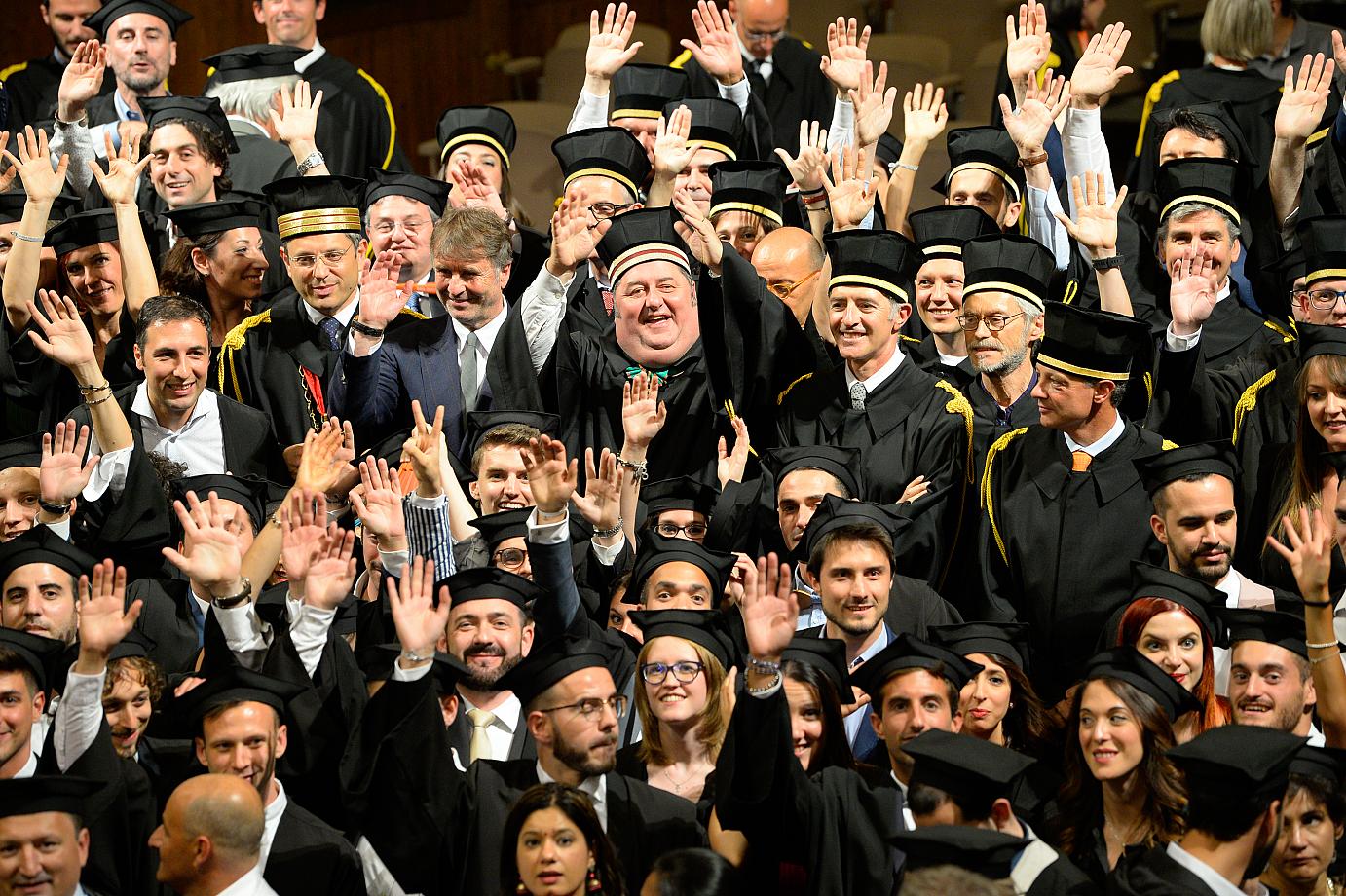