BBS at the Trade Fair with a new style

Bologna Business School returns to welcome students and participants to the Temporary Campus of BolognaFiere, this time in Hall 34, whose underground style has inspired a creative intervention carried out by Bologna writers, curated by Eugenio Sidoli, member of BBS Steering Committee and Lecturer at the Hybrid MBA.

The temporary location of BBS moves from Hall 15 to Hall 34 of the Bologna Trade Fair Center and does so with style. Hall 34 is an ideal space to safely host students, thanks to its 10,000 square meters of floor space, 12 classrooms and 6 breakout rooms that can accommodate 500 students, guaranteeing at least 1.5 meters of social distancing. But this year, in addition to the important technical and technological features, there is something new: the creative intervention of Bologna writers, curated by Eugenio Sidoli, a passionate collector of graffiti and post-graffiti, with the collaboration of Roberto who runs The Graffiti Bench in Bologna, a meeting point for writers from all over the region. 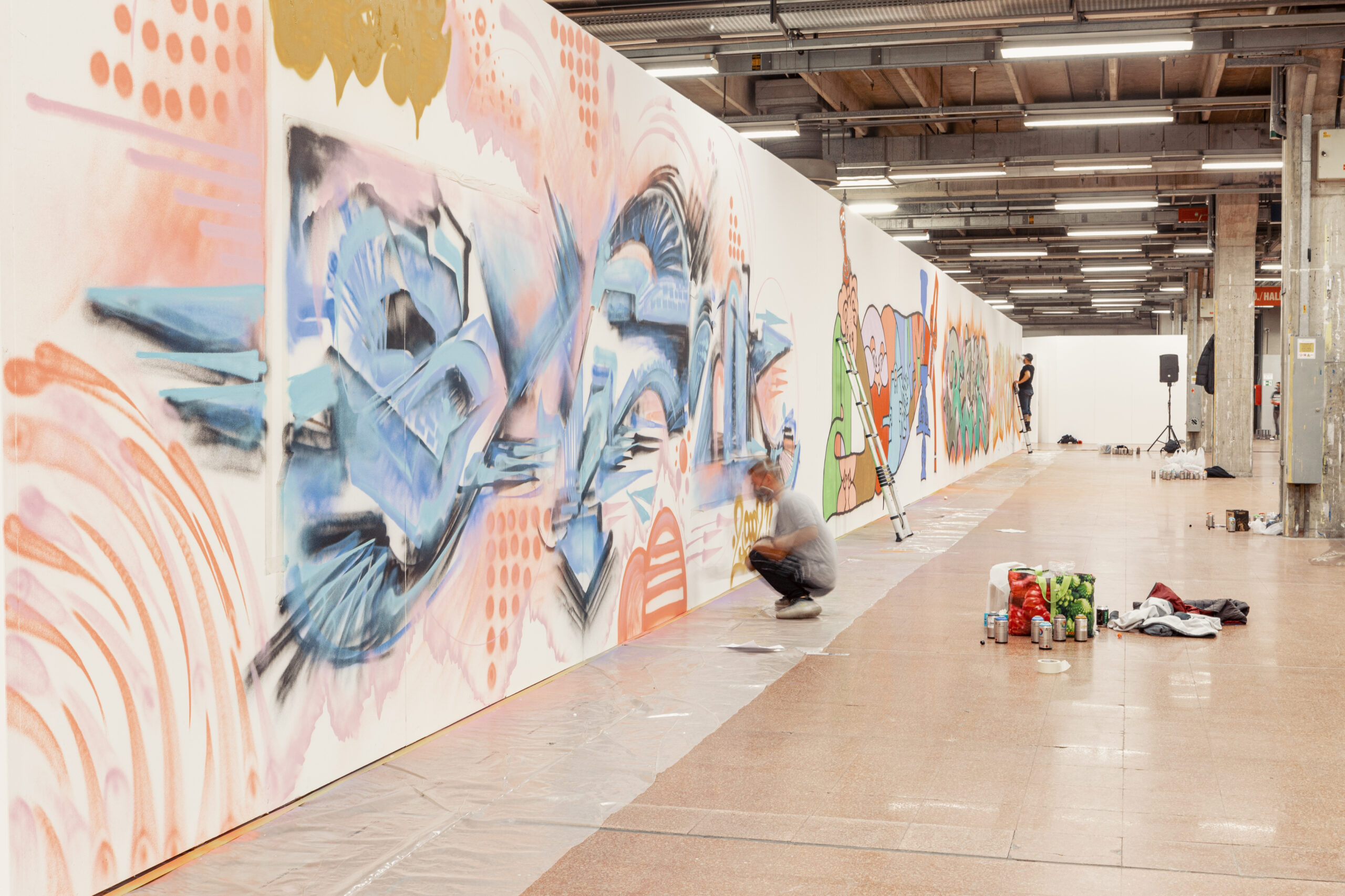 Another new feature is that this year the temporary BBS premises at the Fair will also host products and projects by distinctive Italian companies with which the School collaborates, industry champions such as Ferrari, Ducati, and Lamborghini, that have exhibited their cars and motorcycles on the Campus.

We asked Eugenio to tell us how it went and how and why this intervention represents a moment of integration, inclusion, and encounter among the souls of a city that is today more alive and livelier than ever before.

“It all started with a phone call and an unusual request:

The Trade Fair space that BBS has rented for the 2021-2022 academic year has an underground feel to it but lacks personality. Can we give it a touch of life by having graffiti writers paint the walls of the classrooms?

It was Max Bergami, Dean of BBS, a volcano of creative provocations, whom I admire for his drive, his energy, and his ability to innovate and experiment. Already in 2018, indeed, at his request, I curated, for the park of Villa Guastavillani, the installation of a permanent sculpture by Andreco on the theme of water. I accept the challenge and get started.

This time it’s not a question of having a work of art created; a collective action is needed for the temporary BBS premises at the Bologna Fair, and an impactful execution is required. I ask Roberto Galanti for help and together with the BBS Communication team we define the scope of the action, the rules of engagement and the consumables. So, we plan a night jam, a few hours before the opening of the Global MBA.

On Tuesday, October 12, on time at 8 pm, Roberto leads a crew of 10 writers who have already discussed among themselves how to proceed. They adjust the sketches they had prepared and begin to paint the walls of the classrooms; the surface each of them has in front of them is impressive, 30 square meters, but no one is intimidated by it. 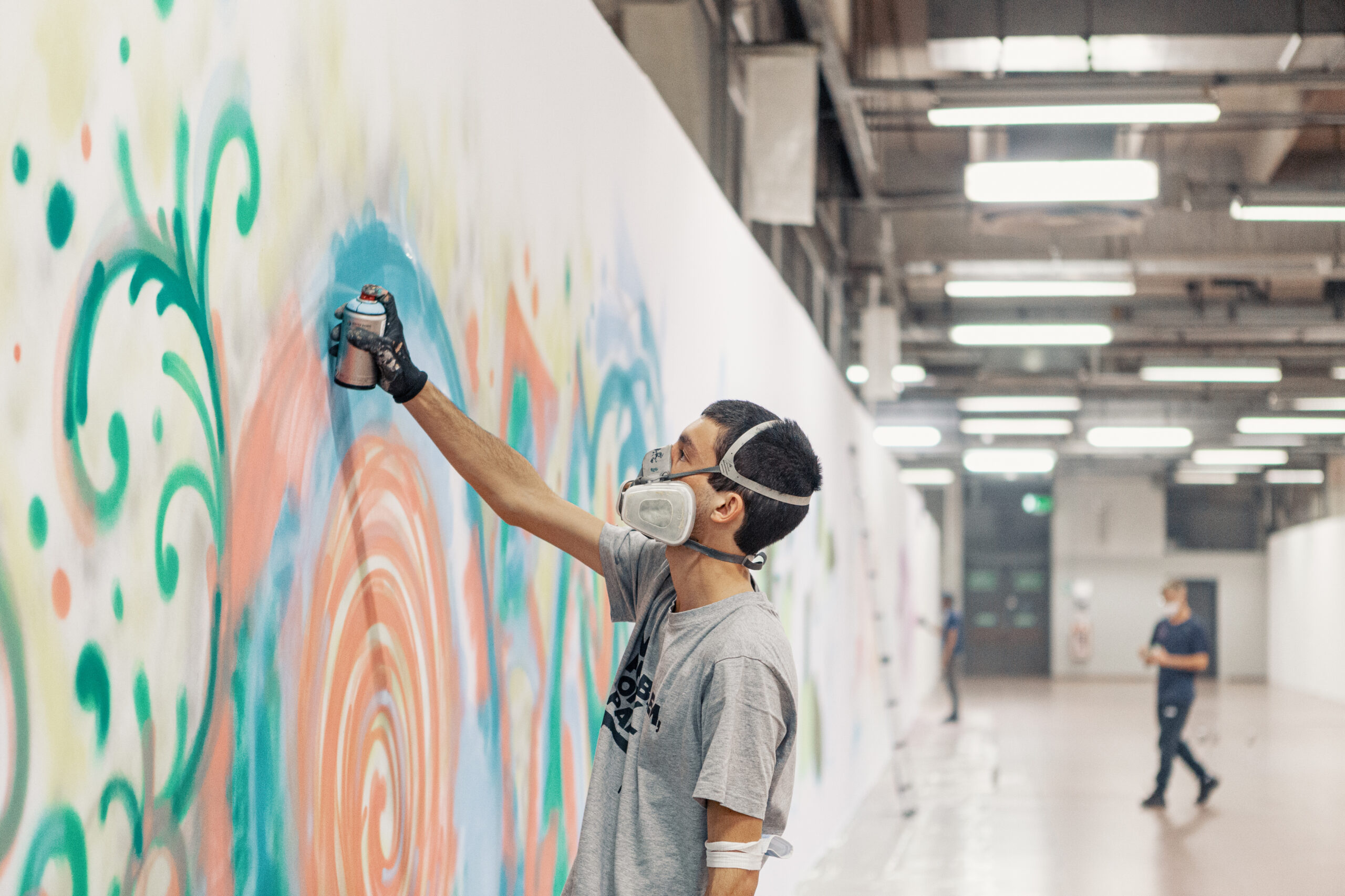 Pizza, beer and a blaring soundtrack of new jazz and hip hop charge our indoor graffiti night with adrenaline. Writers move nimbly on the panels, their gestures are quick and confident, the control of pressure on the spray can cap blurs the color, fills the space, or traces crisp outlines. Each works on their own, but they observe each other and there is constant interaction. They are a crew. They compare, exchange colors, discuss, agree on solutions.

Shortly after midnight, the magic is done. In just a few hours, they painted 10 iconic pieces. The BBS exhibit in the fair space – previously pristine and flat – lit up with color and energy.

What the writers have left on the walls of the fair center is the contemporary evolution of a practice born in the mid-seventies of the last century.

Graffiti writing was born in New York as an underground phenomenon; it is a metropolitan language, a subculture, a practice for the initiated. It defies the censorship of institutions, but in less than 50 years it has established itself in all continents, recruiting generations of adolescents and acting as an incubator for the talent of extraordinary artists. 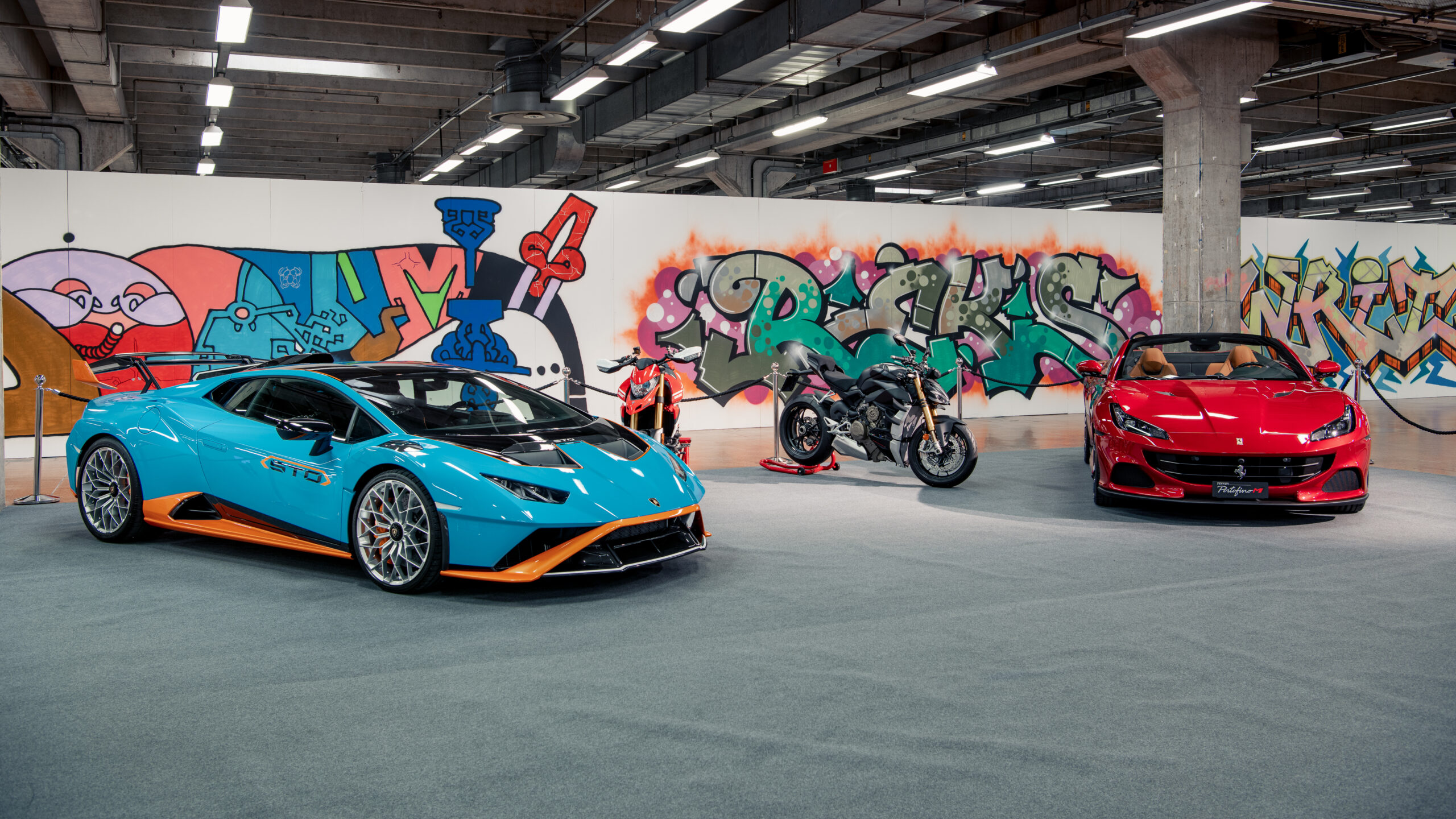 In Bologna the graffiti culture has a tradition that dates back to the time of the student movement of 1977-1978 and to the pioneering studies of Francesca Alinovi at DAMS. Writing, in Bologna, is therefore an early and influential phenomenon in which spontaneous spaces have played a key role in creating a “school” that is still vital and continues to churn out talents.

As I see it, therefore, the jam on the BBS campus at the Bologna Fair is an unprecedented moment of dialogue between the city’s most progressive souls; the management school that has just been accredited in the top 1% of the world’s best business schools and a new generation of writers who keep alive the tradition of creative research that has positioned Bologna at the origins of a movement with a global scale”.