“We are dreamers, we are creators, we are makers: we start with 3D printing to save the world.” That’s no small goal for the Italian 3D printer manufacturer WASP, which took its name from the potter wasp not for its ability to sting, but to build its own home. Massimo Moretti, the company’s founder, launched the slogan in 2018, when, six years after WASP was founded as a 3D printer manufacturer, the first house ever made precisely with 3D printing was inaugurated, built using only mud and straw, a sustainable (it uses only locally available materials) and low-cost way for areas where infrastructure and resources are scarce.

While the dream aspect seems to prevail in the slogan, at WASP they don’t forget that it has to be balanced with scientific pragmatism in order to work (the core of the founders is a mix of engineers and designers). The basis is the company’s adoption of an innovation in 3D printers, called the “Delta configuration”, which allows for significant energy savings, as well as greater speed and accuracy. The idea of building homes using this technology led to the development of the WASP Big Delta, a giant, 40-foot-tall printer that is easy to transport and assemble on site, and then of a starter kit that packs everything needed in a single container with printers of all sizes, including the Big Delta, for a full 3D production cycle. It is an icon now positioned in their technology park and representing a first step towards the realization of the dream.

From the single house, Moretti and his team have expanded the concept to an entire model habitat, called Shamballa, a mythological place of peace and tranquility, where people live in an environmentally sustainable way, using only locally sourced materials to build their homes, and developing vertical gardens with hydroponic technology and harnessing wind power, in turn obtained with 3D printed turbines. Human beings could live in a small EDEN thanks to additive technology, which can print not only the house/shelter but also the energy/water/light/heating systems, vertical vegetable gardens, everyday objects with digital manufacturing, thus contributing to health, art and culture.

Moretti’s idea is that of a circular economy in which the vision feeds the projects that give rise to the products, and these are sold on the market to generate the cash flows that allow the company to continue to support its vision. 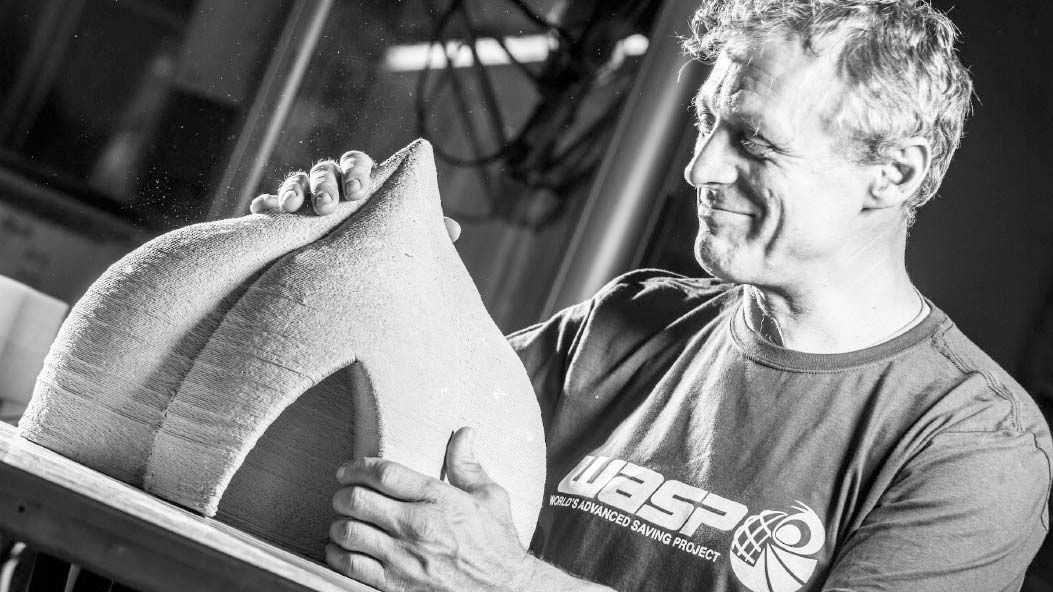 From building homes, WASP has expanded the concept to four other industries: healthcare, energy, food and art. In healthcare, an interdisciplinary team of physicians, bioengineers, orthopedic technicians, and manufacturing engineers used 3D printing to create a digital orthopedic lab, a manufacturing, training, and service network for the production of orthopedic prostheses. The project can also be replicated in developing countries in war-torn areas: for example, one of these labs was set up at the University of Damascus, in Syria. During the Covid pandemic, the technology was also used to produce protective masks and helmets. As for energy, WASP has produced wind turbines to generate electricity, using regenerated plastics. The underlying idea is that the life of materials should be extended as much as possible while minimizing waste. For the food sector, WASP has focused on applications for hydroponic crops to create vertical gardens that allow families to self-produce vegetables. Finally, for art, 3D printing can allow artists to transform their ideas, even those of incredible complexity, into unique models.

WASP has had an organic growth since its establishment, with the proceeds from the sale of the printers being allocated to research in architecture and industry. Many valuable collaborations were established, with universities, research centers, prestigious international schools such as BBS Bologna Business School, architects and architectural firms such as Mario Cucinella Architect, and major brands such as Honda and Dior. Thanks also to customers around the world and to the WASP HUBs, a network of international 3D printing centers with Delta WASP printers, the company based in the Emilia-Romagna region is developing and focusing on internal organization and different possible business models that can be implemented in different application sectors. There is an awareness that only coherent business models can make it possible to transform the dream of building sustainable homes for a healthier world with 3D printers into reality. The managerial challenge of building a path in which a small company can grow with its own financial independence while addressing issues of great social impact is very complex.  The dream must come to terms with the figures of the business. WASP is “flying” towards ever more tangible challenges that can strengthen it.

The difficult pursuit of sustainable packaging

Hera (B): an innovation to realize circular economy